The WWI-Memorial in the Synagogue

In the synagogue there is a memory plaque for the victims of World War I from the Jewish community in Steinsfurt.

This memorial was donated by Else Vogt from Philadelphia and by Samuel Weil.

Probably it was painted before 1928 because the date of Ludwig Freudenthaler's death is written by another hand.

The Hebrew inscription on the memorial is taken from Psalm 118. It means „I shall not die, but live (and declare the works of the LORD)” ◊ 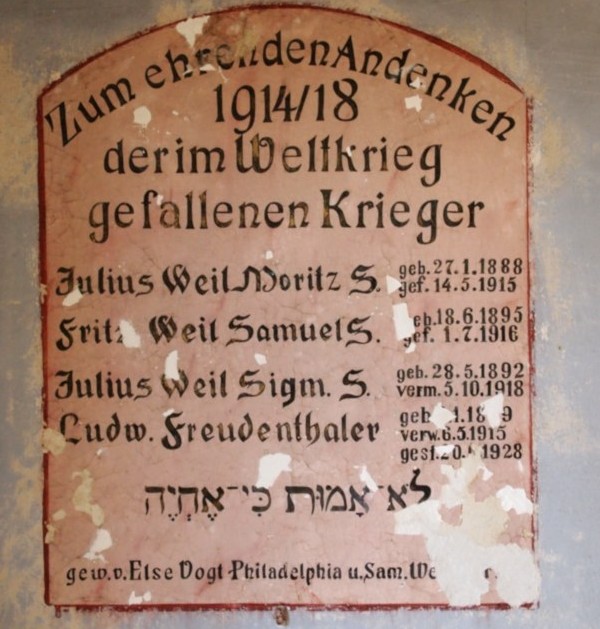 Julius was a member in the Steinsfurt sport club „Phoenix”. The picture shows him as a member of the gymnasts' squad (in front Wilhelm Frank II).

By occupation he was a trader.

He is remembered on the roll of honor in Steinsfurt and on the WWI-Memorial in the synagogue. His sister Elsa (*1886) was one of the sponsors for the memorial.

His parents are buried on the Waibstadt cemetery.

The left-hand picture is from the Steinsfurt roll of honor.

The picture of the Phönix' gymnasts is from the collection of our member, the late Helmut Frank.

Friedrich attended the Realschule Sinsheim. When he left school in July 1910 with the diploma at the age of only 15, he wanted to be a „merchant”◊. For this he later went to Antwerp in Belgium.

Fritz was in the (Baden) Infantry-Regiment No 169. He was killed on July 1, 1916 at Bapaume in the Artois (First day of the Battle of the Somme)◊.

He is honored on the WWI-Memorial in the synagogue and on the „Ehrentafel” in Steinsfurt.

His parents have a common grave in the Waibstadt cemetery. The gravestone shows a shofar on his father's side.

Photo of Friedrich by courtesy of Carlos Weil

Ludwig Friedrich Freudenthaler is one of the four Jewish men from Steinsfurt, that are honoured as victims on the WWI-Memorial in the synagogue.

On the WWI-Memorial in the synagogue is to be read that Ludwig had been wounded on May 6, 1915. He died on June 20, 1928 during a visit in his brother's Julius house in Richen and is buried in the Jewish cemetery of Eppingen ◊.
The Hebrew on his grave stone gives his name as Levi.

In the local newspaper 'Eppinger Zeitung' an obituary was published on June 21, 1928

After her husband's death the widow Hedwig Freudenthaler moved back to Heinsheim where her parents lived. In October 1940 she was deported to Gurs and in 1942 to Auschwitz where she was murdered. We remember her on our Shoah page.

Entries of civil registers for Eppingen, Heidelberg, Heinsheim and Sinsheim (now in the corresponding town archives)

We got the photo of Ludwig by his grandchildren.

The photo of the grave is by M. Heitz.

The Stadtarchive Eppingen kindly provided the clipping with the obituary.

The WWI-Memorial in the synagogue names „Elsa Vogt, Philadelphia” as one of the sponsors of the plaque.

Elsa married Charles H Vogt in New York in 1916. Charles was born in Philadelphia in June 1886 as the son of the German born immigrant couple Friedrich G. Vogt  and his wife Sophia. Frederick, as he was called in the US, began to work as a butcher in Philadelphia, but soon expanded his business and the firm F.G. Vogts & Sons grew to be one of the largest in the US. In 1947 it was bought by the Oscar Mayer Company, that today belongs to the Kraft Food Group.

Charles, too, worked for the family firm in a leading position. Several patents for inventions connected with meat processing and sausage production were filed under his name.

Elsa's parents are buried in the Waibstadt cemetery.

After his father's death in 1891 Samuel Weil took over his inn. He was supported in this by the Steinsfurt council because it was the only inn for Israelites in the village serving spirits◊.

In his later life he suffered from heavy diabetes. In his right foot a gangrene developped, so it was amputated. But then his left foot showed the disease, too. He died on January 3, 1933 Link ◊ and is buried at the side of his wife in the Waibstadt cemetery. The gravestone shows a shofar on his side as a sign for his function in the community.

Samuel Weil's name is on the WWI memory plaque in the synagogue. He was one of the sponsors because his son Friedrich was killed in action.

The picture of Samuel Weil with his grandchildren is from H.Appenzeller's collection.