Latest about this site 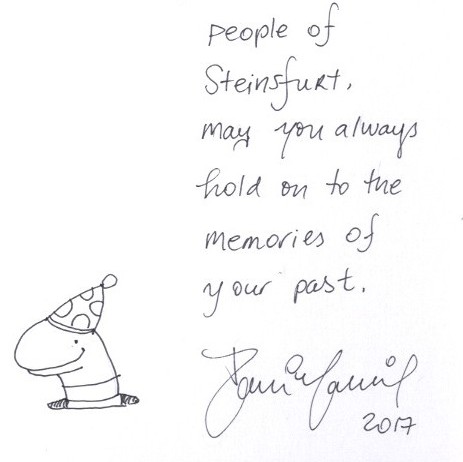 Since the "Long Night of Heimat" has been cancelled we show a video, so that at least a "virtual visit" of the synagogue is possible..

You can see the progress in the restauration: the lower parts of the plastering has been filled in by now!

(To have sufficient lights, the video was recorded on March 28th during the afternoon)

The music was recorded in the synagogue during a concert in 2017.

You hear "Nina" with Vera Finck and Johannes Vogt.

Here is our original plan

Welcome to the Former Synagogue of Steinsfurt

We are a group of volunteers with the following aims:

On this page you'll find information on all those subjects – and of course about us.

The former Synagogue in Steinsfurt is on Dickwaldstraße (former Adersbacher Straße), with the Goldbach flowing nearby.

Visits can be arranged by mail to synagog (at) synagogue-steinsfurt.org

We try to collect and publish the memory of Jewish inhabitants and their life in the community of Steinsfurt.

In addition we think of Jews in Sinsheim and in the surrounding area.

We remember people who were connected with the former synagogue in Steinsfurt.

We have created a memorial book, that is on display in the former synagogue. It remembers the Jews who used to live in Steinsfurt. It will be extended.

We collect personal and other information of persons connected with Jewish life in Steinsfurt.

Even by numbers the family Weil was the most important one in Steinsfurt.

In the synagogue there is a memory plaque for the victims of WWI from the Jewish community in Steinsfurt.

The inhabitants of Steinsfurt always seemed at ease: No Jewish person was deported from Steinsfurt.

We remember the persons who lived in Steinsfurt and were deported and murdered from the place where they later stayed.

Hermann Weil (1868 - 1927) established the internationally operating grain trading firm Weil Hermanos & Cie in Argentina and was political advisor for the emperor Wilhelm II of Germany. He founded the Institute for Social Research in Frankfurt and the „Kochschule” in Steinsfurt. He built the Mausoleum at the Waibstadt cemetery.

The association "Alte Synagoge e.V." was founded in 1992.

We consider it as a very important task to introduce youth to history.

Our permanent partner is the denkmal aktiv AG of the Wilhelmi Gymnasium Sinsheim, but we worked with groups of other schools as well.

Together we started several projects.

On January 27, 2019 at 18:30 pm there was an event on the Steinsfurt Synagogenplatz commemorating the victims of Nazi terror.

Members of the Weil family have been meeting in Germany.

They paid a visit to the former Steinsfurt synagogue, where their ancestors prayed, on May 11, 2019.

On July 13 and 14, 1894 there was the solemn inaugugration of the synagogue in Steinsfurt.

We remembered this on the 125th anniversary of the event.

„Awake my soul" was the title of the concert in the former synagogue on October 19th  at 7:30 pm.

We are very pleased that we are receiving the Citizen Award 2019 of the Denkmalstiftung Baden-Württemberg. The award is endowed with  5.000€. This helps with our work.

More about the Citizen Award 2019

During the summer there will a meeting in the synagogue on the evening of the last Saturday of each month. We will try to learn how the Tora is read in Jewish tradition. This circle has been initiated by a member of our association. All interested people are invited.

(Additional Events are to be expected)

January 27, 6pm on the Synagogenplatz (at the Steinsfurt synagogue) we had an hour of remembrance for the victims of Nazi terror.

Since the "Lange Nacht der Heimat" has been cancelled we show a video, so that a "virtual visit" of the synagogue is possible.

As in former years we will show an exhibition during the Village Fête in Steinsfurt (June 13th/14th) in the Verwaltungsstelle: "The Jewish Mothers of Steinsfurt"

Sadly the event has been cancelled due to the Corona-Virus.

We plan again meetings in the synagogue on the evening of the last Saturday of each month. We will try to learn how the Tora is read in Jewish tradition. This circle has been initiated by a member of our association. We invite everyone intested.

template joomla
Back to top