The synagogue was built in 1893/94. Until 1938 it was used by the Israelitic community of Steinsfurt for services and meetings. 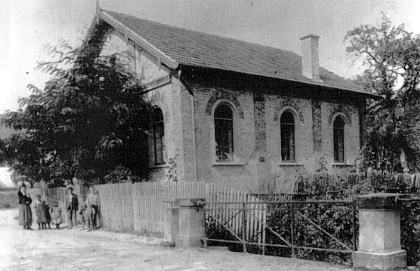 The synagogue was built after plans by the architect Wilhelm Dick (1874 - 1904) from Hoffenheim.

The synagogue was financed with donations and a tombola. Here again the population gave generously

The laying of the foundation stone for the synagogue was on September 25th, 1893.

The inauguration of the synagogue was on July 13th, 1894. Inhabitants and dignitaries of Steinsfurt and even the Christian clergymen took part. This clearly shows that Jews were accepted and integrated into the life of the village.

The few remaining members of the Jewish community were forced to sell the Synagogue in October 1938.

At first the synagogue was used as storage for agricultural goods. It fell into disrepair.

By now it is an important cultural monument.

The society Alte Synagoge Steinsfurt e.V. has as its aim to restore and maintain the building and give it a new lease of life.

More about the society