The Jewish community of Steinsfurt had a mikveh very early on.

In a report dating from November 1822◊ it says:

There are 2 such baths in Steinsfurth, one at Samuel Löw Weil's and one at Moises Feis Weil's place. They are used by all Jewish women. 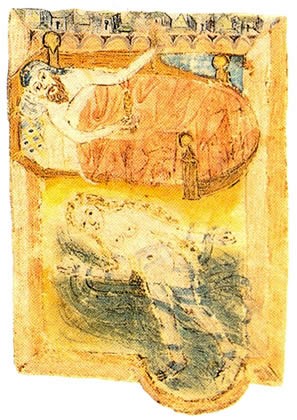 On July 25th, 1823 the Bezirksamt Sinsheim decrees, that the Jews' baths in Rohrbach and Steinsfurth are unsuitable because they are „too low in the ground”. It is then suggested that the Jewish people of Rohrbach should build a suitable mikveh together with their synagogue and observe the sanitary rules. As there were only 7 families in Steinsfurt all of which were poor they couldn't afford to build a new mikveh. So it was suggested that they should use the Rohrbach mikveh as well.

According to the fire insurance register of 1861 the Jewish community had established a mikveh in the potter's kiln on their plot◊. In later documents the building is always described as „Badhaus, einstöckig” (one-storey bathhouse)

According to the maps the Bathhouse covered part of the ground for the synagogue. So one has to assume that it was partially altered or completely rebuilt when the new synagogue was erected. This would explain the bricked-up window in the north wall of the apsis.

In later documents the „Badhaus” is always mentioned and even in 1939 the land registration entry for finalizing of the sale says „Synagogenplatz mit Synagoge und Badhaus im Ortssetter an der Adersbacherstraße” [the part of Steinsfurt where the synagogue stands is called „Ortssetter”] ◊ .

This means that the building has been standing at least up to the sale in 1938.

In another document from 1939 it is called „woodshed”. So we assume that the new owner found a different use for the existing building. ◊