In 2011 the associations „Jüdisches Leben Kraichgau“ and „Heimatverein Kraichgau“ initiated a joint mobile exhibition on Jewish life in the Kraichgau. 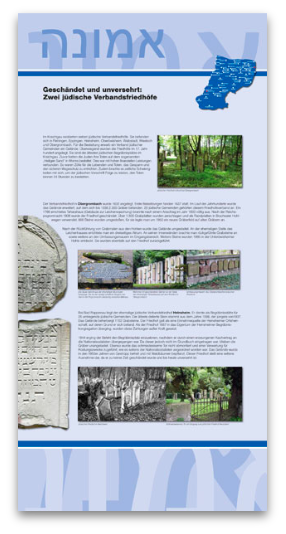 The Kraichgau had the highest density of Jewish congregations in Baden. In some villages up to one third of the inhabitants were Israelitic. Especially in the 19th and at the beginning of the 20th century Jews left their marks on the cultural and economic life.
The aim of this exhibition was to bring together the historical facts about Jewish history in the whole Kraichgau.
This was achieved in a joint effort of 6 associations from the Kraichgau and more than 25 historians, teachers, archivists and others.
The exhibition was supplemented by a roll-up containing the names of all Jews that werde deported on Oktober 22nd 1940 from the Kraichgau. In addition the 12 participating schools produced 11 roll-ups describing their projects. So the complete exhibition contains 37 posters.

(Content and picture are taken from the homepage of the  Verein „Jüdisches Leben Kraichgau e.V.”) and from the exhibition catalog (own translation)

Our association supported this work.

Since April 2011 the exhibition has been shown in several places, e.g.  in Bad Rappenau, Bruchsal, Heidelberg, Karlsruhe and Sinsheim.

You can also request the exhibition under that contact.