On Sunday, July 14th, at 15 pm, we invited for a celebration in the synagogue.

We had asked Rabbi Janos Pawelczyk-Kissin from Heidelberg, who is also responsible for the region of Steinsfurt, to give a speech. This was to remember the fact, that Rabbi Dr. Hillel Sontheimer from Heidelberg, who was then responsible, held the speech for the inauguration. The listeners liked the speech and cheerfully applauded, although it was certainly was much shorter than the original speech by Rabbi Dr. Sontheimer.

An example for the former live in the synagogue was a recording of the  Kiddush.

Chazzan in the recording is Kurt Wimer. (He – formerly Kurt Wimpfheimer – was born in Ittlingen and attended the Realschule in Sinsheim for three years. During that time he came often to Steinsfurt on Friday afternoon and then stayed with his aunt Mina Kahn. Thus he avoided to have to walk the full way to school on Shabbat. Of course at these occasions he attended the evening prayer in the Steinsfurt synagogue. Later he became the chazzan at the synagogue in Worms. The recording is from a memorial meeting with members of the Worms children's choir which Kurt Wimpfheimer conducted for several years)

Rabbi Jona pointed out the you can clearly hear the „local dialect” of the pronunciation of Hebrew in the recording. 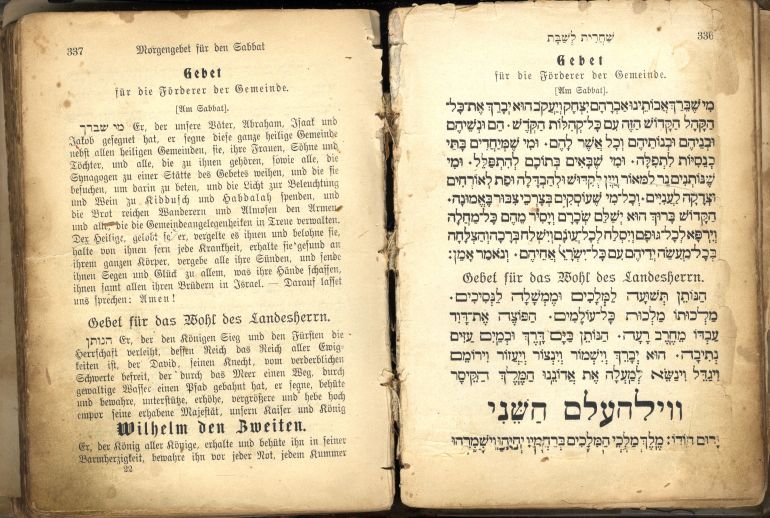 We were especially pleased that descendants of Jews from Steinsfurt from three separate continents had come to take part in the celebrations. Susan Braverman donated the siddur to the association, which had been used in the synagogue by her grandfather Max Kahn for many years. It became part of a small exhibition in the synagogue.

The event was covered by the local press, the Rhein-Neckar-Zeitung on July 16th.

Translation of the article